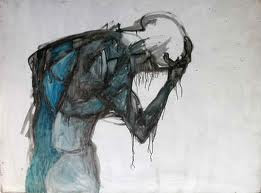 ["People find the problems they think they have instead of not thinking and just looking."-Vic]

Here it comes...the first REAL post of 2011...Ready or not,this is what still remains:

Is there not another realm to which we can seek refuge,
To a something more real than reality,something bigger than huge,
To where the past is still prezent and the horros are unknown,
To where there is no king,nor crown,where all is a mystery and nothing is known.

What is it that we call "matter" when we rise from dust and to dust we all return,
As we are us only because we know our names after we are born,
Shattered right after by stories that are left untold,
Playing our cards with patience,even though in the end we fold.

I feel my misery covered by grief,
I feel my peace now stolen by my thief,
I conceive life as the race towards defeat,
To be honest,we barely are more than a piece of meat.

[Firstly,before starting,I'd really like to share an announcement...
Since of yesterday,the breaths of a most dear friend have stopped.Some knew him by Claustrofob,although his closest of friends named him Vic (from Victor).
For those of you that do not know who Victor was or haven't had the chance to meet this genius in human form,I will tell you this much:

Victor was an orphan from the age of five and after the death of his last relative (his grandfather) he was given to child care.Since then,this once orphan managed to step higher and higher between the ranks of his fellow siblings (12th times top of his class) and continued so in his years of university.After finishing his NBA in a Computer Programming field he got to one of the most prestigious ranks a programmer could ever dream of.

It is not wrong to say that he worked hard and be sure that his journey to the top of the mountain was though,yet it was his intelligence altogether with his perseverance,his will to go further than any had ever went and pushing the limits further,his never-ending flow of energy and nonetheless,his smile in either rainy or sunny,joyful or painful days that kept both him and everyone around him moving.

He was everything in the world for me.I could never see him as simply one individual.
Vic was as close as a brother,as concerned as a father,as loving as a mother and,to my privilege,he was my friend.

My words are meaningless when trying to describe what a miracle he was for me and many others (I am sure),yet know that never have I loved another human being,and never have I cared for another as I felt all of these and plenty more for Victor.

I wish I had spent more time with you my friend,I wish I had had the opportunity to learn more from you,I hope you can forgive me if I ever did you wrong,but most of all,I wish you rest in peace my dear friend and know that you will forever live within me (guiding me hopefully) and the lives you have touched with your brilliant mind,your creativity and your determination to make good out of wrong and better out of good.
It is him to who I dedicate this post and many more to come in the future.

I would to ask from you (stranger or friend) not more than three things:


1.In honor of Victor's life,I would ask a moment of silence from all of you,time in which we may all pray in his name as a small, yet well deserved sign of respect to one of the most incredible men that I have met throughout my life.

2.As one of his favorite hobbies (actually a great part of his life),Victor enjoyed music (especially the sounds bound to the strings of a guitar).
For those of you who knew him (and even the ones that do not),I would like you to remember his favorite song.


3.I would like to share something a small piece he once wrote to me.If possible,I would really appreciate it if no one copied this small piece of text(which I permitted myself to translate in English as best as I could).It reads as follows:

English:
"In the end they shall see the light and all that was once great and now extinct shall rebound into the hearts and minds of all:'I shall honor my legacy.','I am wrong yet I at least I can tell.','If I ever was to blame someone,then I would be the one blaming myself for wanting to blame in the first place.','I am superior to none...I might just simply know more.'.In the end,these thoughts will be the only ones that will matter,but...until then...I'LL GIVE LIFE ONE HELL OF A RIDE!"

May God rest his soul in peace.]


Greetings to one and all as it's been a while...

Really missed writing on this wall and from now on,whenever I shall have the time,I promise to write,and never let go.


I'd like to give a heads-up and special thanks to the people that have made my return to the blog from impossibility to certainty:
1.Victor
2.Eva
3.Andreea
4.George

I owe it all to you and I think it is enough to say that I'll always be in your debt.


Because of the terrible events written above,today shall be an empty post.

See you all on another day,